Get on our list to be the first to know about
new collections and exclusive offers.

By clicking submit, you agree to receive emails from Fanusta

The Tale of Earth - Ceramics

Categories
Recent Posts
Make your Wall Happy with some Quirky Wall Decor Ideas
Is Your Bathroom Guest Ready?
Light up your Space with Candles
Add a Splash of Colors to your Home Decor this MONSOON!
The Tale of Earth - Ceramics
Easy Ways to Incorporate Accent Furniture into Your Home 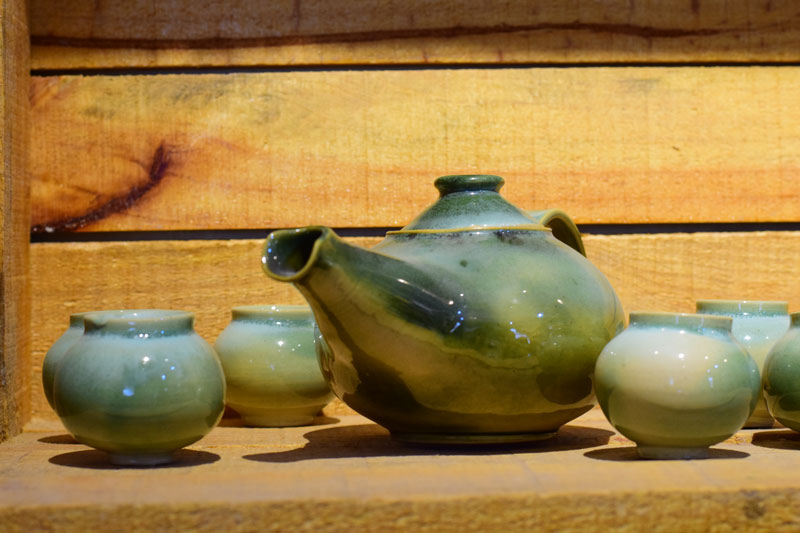 In the past few years, pottery has taken a hike from its old image and stepped into the world of fashion. Pottery or Ceramics is a lot more than just an emerging market or a lifestyle trend, it connects us to history, heritage, culture and earth.

Ceramics have been one of most age-old industry on the planet and the technique takes its origins way back in the prehistoric period. The word "ceramics" comes from the Greek word keramikos, which means "pottery", which in turn comes from the word keramos meaning "potter".

Ceramic art in general, is made by utilizing together mixture of clay, earthen elements, powders as well as water and shaping them into desired forms by firing them on high temperatures. The art is considered an important archaeological artefact.

As early as 24,000 BC, animal and human figurines were discovered to be made out of clay and few other materials, fired in kilns and dug into the ground. Numerous pottery evidences have been found throughout the ancient history of settled societies. Chinese, Cretan, Greek, Persian, Mayan, Japanese, and Korean cultures, as well as the modern Western cultures, all show artistic evidences of ceramic art in their unique styles. By 10,000 BC, clay, utilized in most ceramics traditionally, was used in the form of vessels, accessories, storage containers and much more.

In India, the excavations from Indus Valley generated a variety of pottery evidences- plain as well as decorated. The initial wheel made pottery has known to be found in the Harappa civilization. Painted in red and black, the pottery was majorly excavated in the form of vessels with designs and motifs of circles, triangles, geometrics, animals and nature.

With the settled societies growing, pottery took new shapes for its utility, in the form of artistic expression as well as for accessorizing oneself. The growing utilities and forms also led to formation of different types of clay- earthenware, stoneware, porcelain and bone china, which varied due to their mineral ingredients and firing techniques

Pottery decorative are known to have become more significant during the Shunga, Kushan and Gupta dynasties in India. In 12th Century AD when Turkish rulers motivated potters from Persian and Central Asia to move to the present day North India, they got along with them the glazed pottery. The potters in fact, held an important position in the society in the old times and pottery carried with it the uniqueness and particularities of culture and lifestyle.

Centuries and cultures later, pottery still play an extremely significant role in the society. It is a culture that is practiced widely even today in India, Nepal, Pakistan and Bangladesh. The stoneware and earthenware pottery are a booming industry in present day due to the ability of the artisans to adapt in the growing market and make changes to the craft adhering to the needs and trends.

Though the craft is constantly developing with time, the method of creating pottery is getting more and more elaborate in order to catch up with the fast paced mass market. With the need to inculcating upcoming color trends, artistic expressions and more utilitarian forms and shapes in the art, the making technique is expanding and becoming long winded.

The whole process of making pottery is a tedious one. The complete process is done by hand and every piece goes through several steps, taking about 25 days to a month to finish. The initiation of a ceramic pot/item begins with procuring the raw materials, which primarily comprises of familiar rocks, feldspars and different types of clays, each with their own distinctive character and consistency.

The first step requires wedging and kneading of the clay by mixing and rolling it to build uniformity and make it free from air bubbles. It is extremely essential to completely get rid of these bubbles to ensure no cracks in the end product. The clay is then either taken on the wheel, in order to achieve a circular form or rolled out on a slab for flatter forms and other non-circular shapes. On the slab the shape is cut out, joined together and given the required form.

After creating a form and structure for the product, it is left to dry. At this stage in pottery, also known as leather-hard, the clay is partially dried to an extent where all shrinkage is completed, and it reaches a consistency similar to that of leather with the same thickness as clay.

At this stage, the extra clay is also trimmed off and any detailing according to the requirement is done in the form itself. After which, any additional form changes like putting a handle, lid etc. are made.

Following this, the piece is left on a shelf to bone dry for a period of about a week. Slow drying is preferred to provide the clay time to mature and to achieve a strengthened form. After air drying, it is put into the kiln for the first time, also known as bisque firing, done at a temperature of 950 degrees Celsius. The bisque fired pieces are then taken forward for adding color or glazing. Glazes are created in unique textures and colors utilizing varied minerals and oxides. The pottery then is put back into the Kiln at a temperature of 1250 degree Celsius. The kiln converts the glaze into a glass-like coating which makes it virtually impermeable to liquid.

Fanusta is collaborating with new age artists to makes its own small contribution in bringing to light the extensive process and hard work gone behind these minimalistic ceramic home wares to life. Through this step, we are supporting new generation artists in the conquest to opt an age-old and extremely laborious art form for the creation of kitchen and home ware that is not harming the environment. Stoneware, earthenware and porcelain all find their source from the earth, and when used, they return back to the earth. In this fast pace plastic world, ceramic is a material which is beautiful, practical, and can take varied shapes and forms without harming our nature.